I feel so lucky to be able to work at such a beautiful modern campus. My office is in the city centre, rather than Amager which is where the south campus of my university is located, but I like to roam around the different campuses because each one has their charm.

I’ve visited a great many universities throughout my studies and working life, and can honestly say have never walked around a modern campus that I genuinely find aesthetically pleasing to look at – until I came to Copenhagen that is! Usually it’s the older buildings that I enjoy being at, whereas new campus developments in cities always seemed to me like glassy, gargantuan structures that don’t quite fit with the rest of the architecture.

But as I’ve mentioned plenty of times before on this blog, modern architecture is really something special in Copenhagen – it’s something you can seek out as something to admire around the city. The South Campus of the University of Copenhagen is no exception, and it is probably one of my favourite places to go work – it’s fun to walk around, it’s clean, it’s elegant, and a stone’s throw from Islands Brygge, one of the city’s most beautiful Harbourside walking areas.

The little bike caves built-in (I call them “bicycle hobbit holes”) are the showstoppers for this pedestrianised campus, though the circular student accommodation building design comes a close second – have a look below and let me know what you think! 🙂 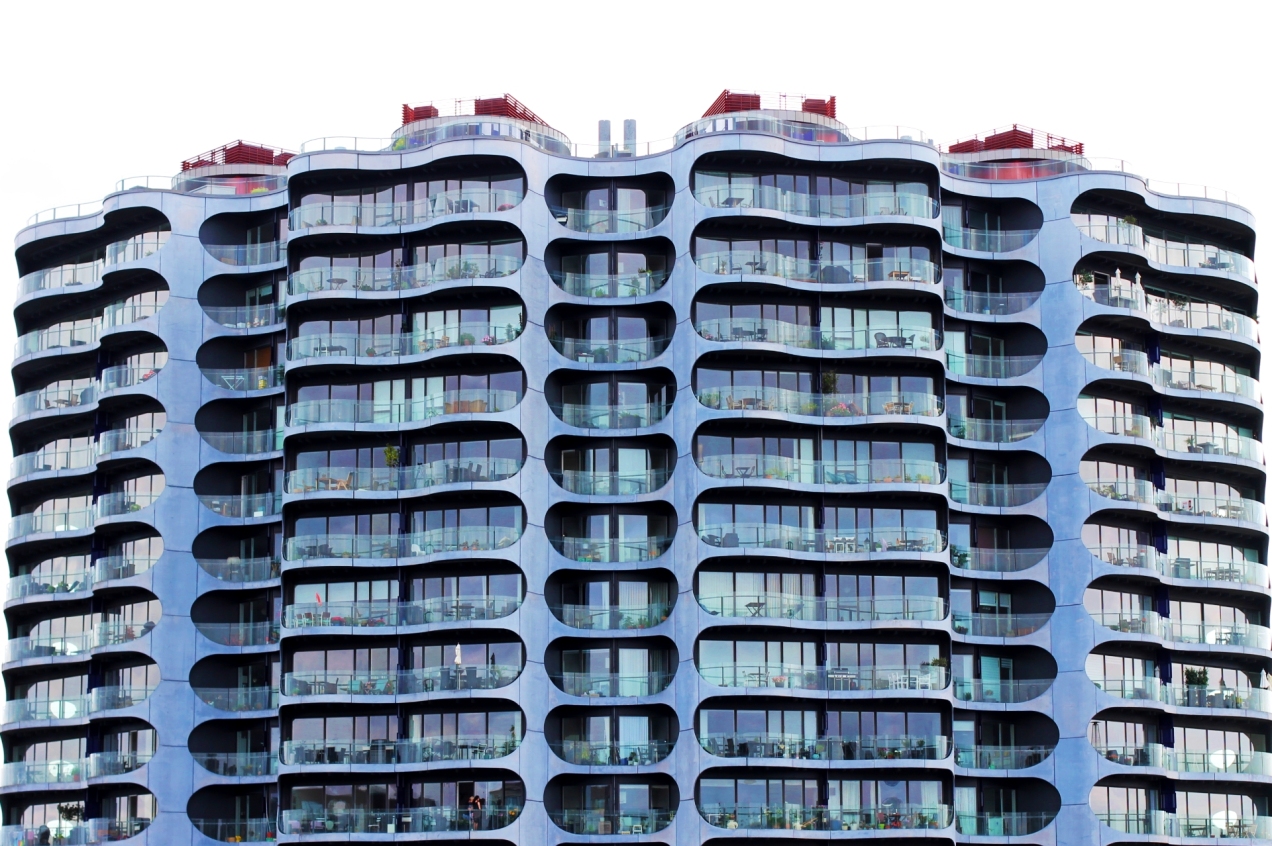 One of the things I like most about Copenhagen is how walkable some of the modern, residential harbour areas are. I’ve never been in a city where it feels like you have a lot to “see” even when all you’re doing is walking past a bunch of apartments by the water.

As you will see from the pictures, there is an explanation for this – the buildings happen to be very interesting and fun to look at from an architectural standpoint. It’s also fun just to walk around, point to a bunch of apartments that look worthy of moving into, and do a bit of imaginary ‘apartment-shopping’ in your head 🙂 Enjoy!

The more I visit Nørrebro, the more it grows on me – the part of Nørrebro close to town is, in my opinion, the busiest and most interesting part of Copenhagen (at least for a young person like me). It reminds me a lot of the neighbourhood I used to live in Bristol in the UK (Stokes Croft/Montpelier) which was an area with plenty of street art, skaters dragging their wheels on the roads, the coolest music venues, lots of vintage, charity, and independent shops, vegan cafes, alternative cinemas, and so on. Nørrebro is like a cleaner, even more “hip” version of Stokes Croft, and could probably be compared to many up and coming areas of London.

Compared to my beloved own neighbourhood – Vesterbro – Nørrebro feels more hectic, more diverse, more artsy. I say those things in a good way. In Copenhagen, Nørrebro unfortunately has the reputation of being a “dirty” area with “gang activity” “crime” and so on – I don’t know how true those claims are, but either way they are terms I tend not to attribute to city neighbourhoods because I think they are loaded terms, and well – let’s just say Danish standards for a rough neighbourhood are quite different to that of one in the UK. Of course, ‘cool’ or ‘hip’ areas come with a certain level of hype – but if I could pick a street in the neighbourhood that really captures and distils the unique vibe of Nørrebro it would be Blågårdsgade (try saying that twice as fast)!

Just take a look below for all the weird and wonderful sights you can take in the length of a single street.

I mentioned in a previous post that my camera got ruined in the rain. These were the last shots I got on it before the rainfall completely messed up my camera inside my bag (thankfully with my memory card intact).

I’ve never seen anything like this weather before – skies with dramatic storm clouds and narrow slivers of sunlight that made for some very artificial-looking lighting. You can see what I mean below – everything is just visible enough, but you feel like you are walking under some big shadow cast from the sky. I’m pleased I got some cool photos out of it though!

This is another very photogenic area in Copenhagen at golden hour. What I just love about this place is that if you look one way from Amalienborg Slotsplads (the courtyard of the Royal residences) you get a majestic view of the rococo-style “Marble Church” Marmorkirken/Fredriks Kirke; if you look the other way, you get a view of the water and the very modern looking Copenhagen Opera House (Operaen) which was built less than 20 years ago. The opera house was built in alignment with Amalienborg. Take a look below.

Yesterday evening I met up with a fellow photographer/hobbyist to take a couple of shots around town for golden hour. I can’t emphasise enough the fact that Copenhagen on a summer evening is definitely the place to be. The vibes are good: there’s food, there’s music, and the sun takes forever to set. I’ll leave you with some shots from the iconic Nyhavn harbour (which was relatively uncrowded thankfully – not so keen on the place when there’s big crowds)

Hope you enjoyed this photo-heavy post, have a great weekend 🙂

After almost six years of living in Bristol, I got so accustomed to the place I even stopped taking photos of the city. But I dusted off my old DSLR the other week – heaven knows the last time I took my camera on a day out – to capture some of my favourite spots on my Harbourside walk. Bristol is only really nice for like three months in a year (if that…ha) but I could spend every single day on the Harbourside when it’s warm and sunny like this. I mean just look at these views…